Well, after a few weeks of water changes, treatments and learning even more than I have about fish tanks and proper care and feeding, the water became safe for fish again.

This was no small thing, since Blondie, Goldie and Mr. Boney have survived the full ignorance and unimaginable high toxicity levels of the tank thus far. 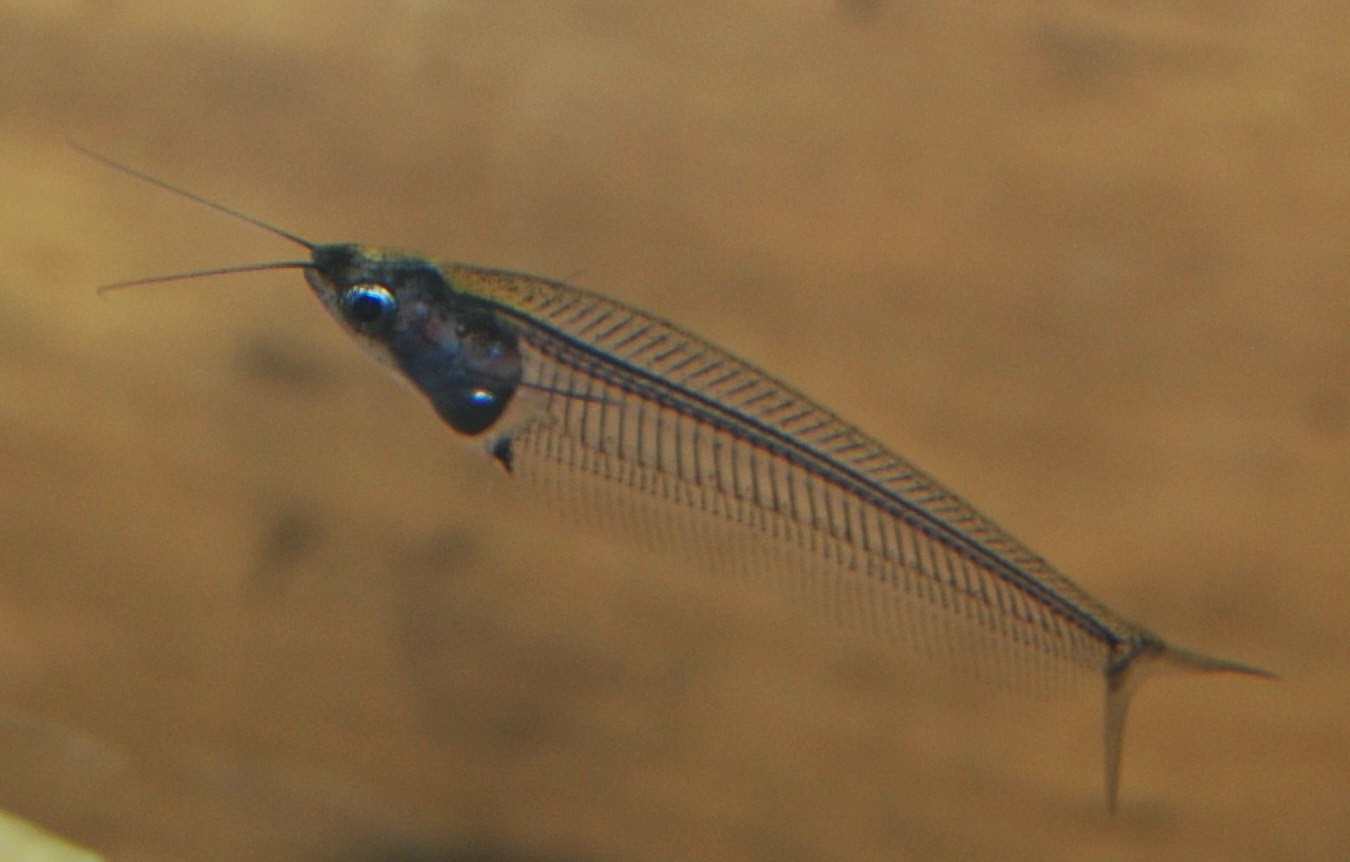 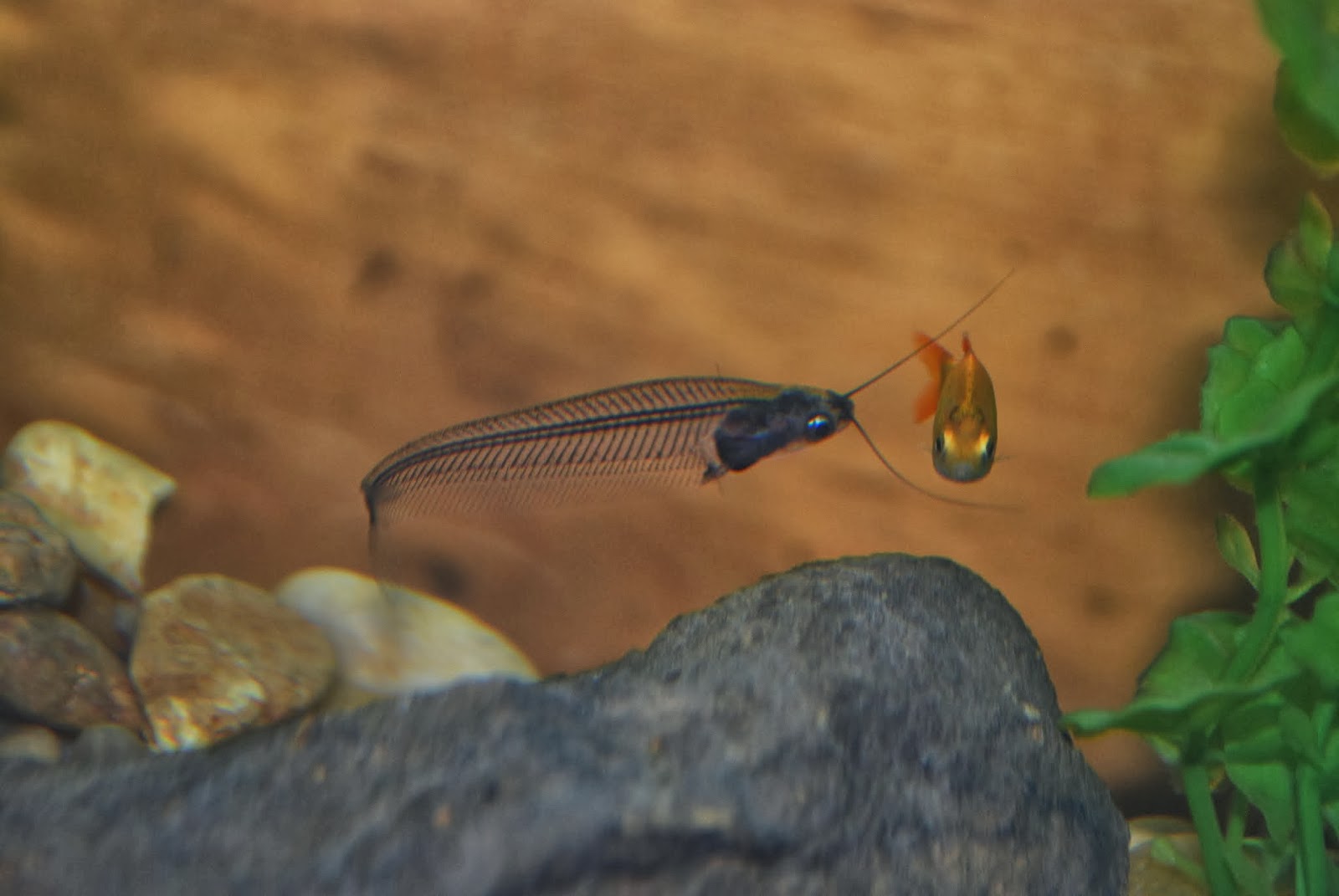 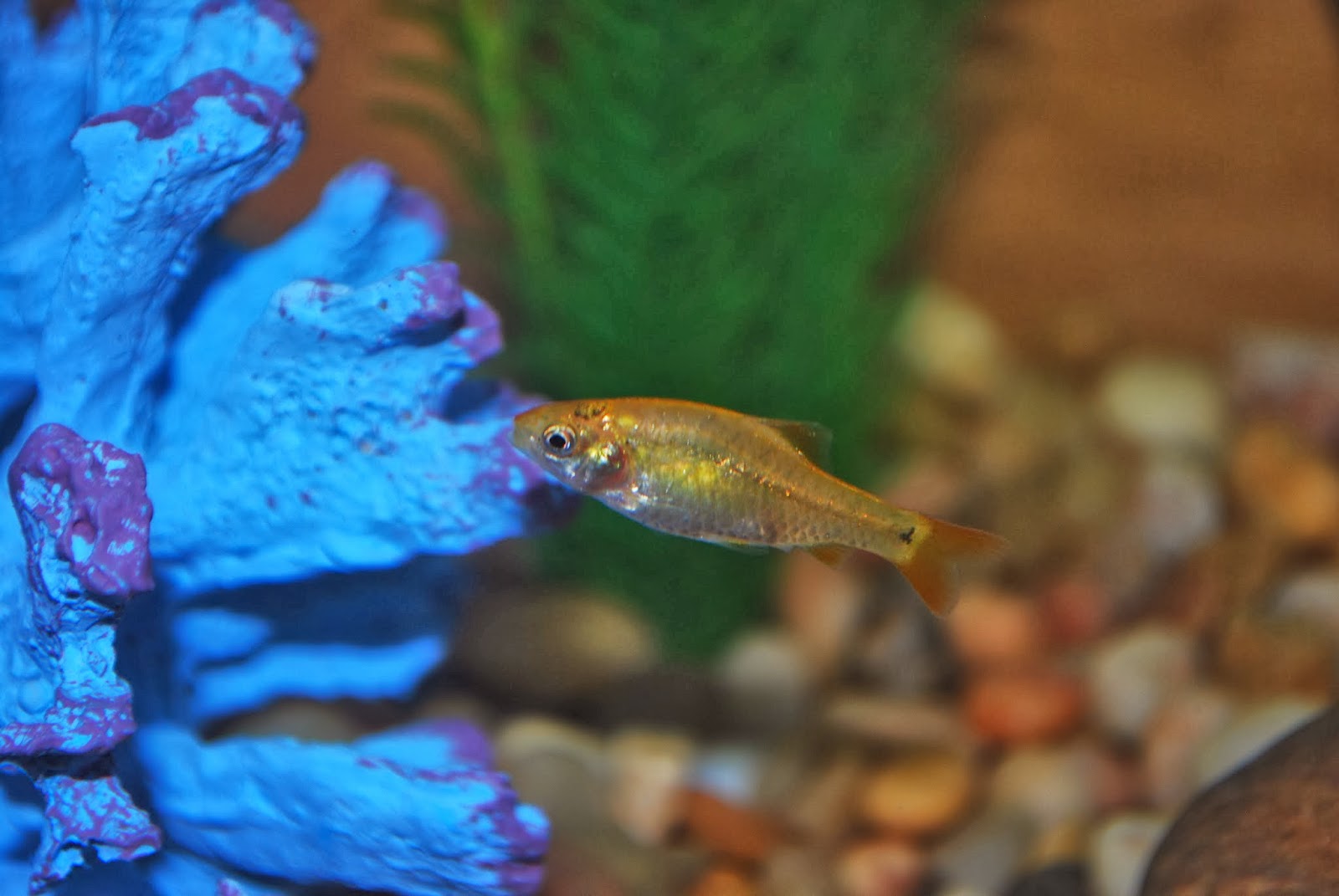 So, with some trepidation, I headed out after I dropped the kiddos at school to do a little fish shopping.

After some deliberation, and talking with the helpful fish experts, I decided against rays and eels, and went with three Mickey Mouse Platy's and a Plecostamus to help keep things clean. 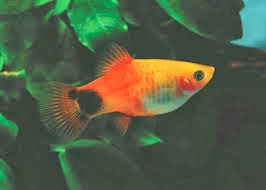 I don't have any good pictures of my little MM's, because they swim so fast. I borrowed this one of the net.

While I was checking out, I noticed a tiny shrimp looking thing swimming around with the pleco. I was told he was a Ghost Shrimp. 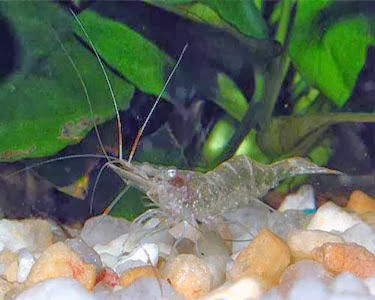 Another borrowed shot.  I can't seem to focus on these little transparent bugs.

The pleco died shortly after introduction to the tank, which had me all worried again. So I rushed a water sample off to the fish store again, was assured the water was OK, and got some money back for the poor dead pleco.

So, I started doing some research on Ghost Shrimp... because, of course I did.  Turns out, they are tank cleaner uppers as well.  So I picked up a few more the next day, and took them back to hang out with the little freebie I got.

Remarkably, thankfully, and happily, all of the fish are now doing quite well. The water cycle is doing well, and all of the tankmates seem to be getting along quite well!

One slightly tricky thing that may be needing to be dealt with later is that two of the three Platy's are female.  We've named them Mickey, Minnie and Daisy.  I have a feeling at some point we may have to deal with some little Mickey's and Minnie's.  Of course, they give birth to 40-60 babies at a time, so we could get into some deep, fishy trouble at some point.

Anyway, I'm still loving the tank, as are the kiddos.

More Later
Posted by John at 12:05 PM No comments:

Rookie Mistakes, or How To Kill Your Fish Without Trying Hard

My father  and my wife chuckle at me for reasearching the heck out of things that interest me.  I bought the Bison Producers Handbook to learn more about buffalo farming. I practically got a doctorate in metalurgy when I started making knives.  And I can tell you more about glass and its properties than a normal human should.

So it came as no surprise to either of them that when we got the fishtank, I was online for a long time doing my homework. How to set up the tank. Best fish for beginners. Behavior patterns for the fish we got. That sort of thing.

But even with all of the learnin', I still made a dumb mistak that cost the lives of six of our fish over the weekend.

Bear, the Variatus died a while ago.  He never did seem quite right.  But, like all good fish owners should, I have been having my water tested every week (FREE at Petco and other pet stores that sell fish!) just to make sure that it is "healthy" water.

Here's a short course. A fishtank is a mini-ecosystem.  Fish poop and uneaten food breaks down into ammonia, which is harmful to the fish.  The ammonia breaks down into nitrites, also harmful to the fish.  Nitrites break down into nitrates over time, posing little risk to the fish.  Thanks to filters and plants, the ammonia and nitrite levels can be kept down in safe quantities.  This whole process is known in the aquarium world as the nitrogen cycle. There is an excellnt explanation of what sorts of filtration is available for tanks and why they are important here.

Anyway. Last week I took some water to be tested and was told that the ammonia was starting to rise.  Not dangerous, but rising. As to be expected after fish are added to the tank.  But I worried about it, and the guy at the fish store told me that I could buy a little bag of rocks specially treated to absorb ammonia it I wanted to.  Just put it behind the charcoal in the filter and I'd be good to go.

I just needed to know what kind of filter I had.  Which I didn't. So I guessed.  ROOKIE MISTAKE #1. Don't go with a best guess.

The ammonia absorbing rock pouch I got for a little under two bucks ended up not just dropping in behind my charcoal filter.  It was too big.  But the water NEEDED these little rocks! Thought I.  So I cut the bag open and carefully poured them in behind the charcoal filter.  SUCCESS! Thought I. And I promptly forgot about them.

Then came the weekend.  The Tiger Squadron was acting funny.  Always pointing their heads down. Not as zippy as they were before.  I was a little worried, but had read that sometimes when they swam head down like that they were doing a mating dance sorta thing.  But all four?  All the time?  Weird.

The Cherry Barbs also looked a little funny.  Like they had dust on them.  I found nothing about that on the internet. They seemed otherwise just fine. Darting about the tank as usual.  I went to bed on Friday night a little concerned, with thoughts to keep a watch on them.  But the water was fine...right? I JUST had it tested a couple days prior.

In the morning, all of the fish were there. I gave them a little food and noticed that the Tigers were not as hyper about feeding as they had been.

A couple hours later, I noticed that one of the Tigers was stuck against the intake tube of the filter.  This was not good.   Upon closer inspection, he was dead.

Then I noticed that two of the other tigers were resting dead on the bottom, hidden behind plants.

The kiddos were a bit upset, and we had a small funeral and burial at sea for our now departed fish friends. (That involves a few kind words, a salute, and a final flush)

I thought that perhaps I had overfed them, and felt guilty at their passing.  I had given the tank a few freeze dried bloodworms, as from my reading I learned that fish like a little variation in their diet.  Maybe there was something in the bloodworms?

A couple of hours passed, and then I noticed Flashy, the big Cherry Barb, hiding very still behind one of the plants.  Very, very still.

And where was Shiny? The other Cherry Barb?  I couldn't see him anywhere.

I fished out Flashy and we had another fish funeral just before the kiddos went to bed.

After they were tucked in, I went back to the tank to find Shiny.  It came down to me physically moving plants and decor around, and still I did not see him.  It was very puzzling.  I knew he was dead.  The remaining fish were very agitated with me pawing around in the tank. If he were alive, he would have been a swimmin'.

Later that evening as I told my wife about the big kill off, I was searching the tank again and finally found him. Partially hidden beneath some rock.

Another Crap. Another fish funeral.  I went to bed with two Gold Barbs, a Glass Catfish, and the lone survivor Tiger Barb swimming around the tank.

Nobody died on Sunday, and I thought perhaps we were out of the woods.  But when I went to bed that night, the last Tiger was swimming with his head down.

When I woke, the last Tiger had died.

Another fish funeral.  This was getting ridiculous.  As I left to take the kiddos to school, I also took another sample of water to be tested.

This time, the ammonia reading came back as very high, and the nitrite level was the highest the chart could detect.  Somehow in a few days the water had turned toxic!  But how?  I ran through all of the things I had done with the fish guy.  I had added a little water, but it had been sitting out for a few days and should have been fine. I had just changed the charcoal filter when I put the ammonia rocks in. I knew that levels could get wonky during the start up phase of the tank, but in just a few days like that? We were both puzzled. Even the ammonia catching rocks should have helped.

I opened the cover and was horrified to find that the ammonia catching rocks had actually blocked all but about 10% of the charcoal filter, and unfiltered water was flowing over a little partition directly back into the tank.

Yep.  That would do it.  ROOKIE MISTAKE #2 - use the products as they are intended until you know what the heck you are doing.

I cleaned out the filter. no more ammonia rocks, and wonder of wonders, the filter has started working properly.  In a day or two I am taking another water sample for testing. As recommended by the fish guy.

I am hoping that Goldie and Blondie and Boney will make it.  Though Goldie has been swimming with his head down today.  Which worries me.

I am hoping I don't make any more dumb mistakes that cost the life of my fish.

I am hoping those little fish can forgive my ignorance when I see them again at the rainbow bridge.

Sorry fish. I really am. I learned a ton from this tragedy, and will not make those mistakes again. 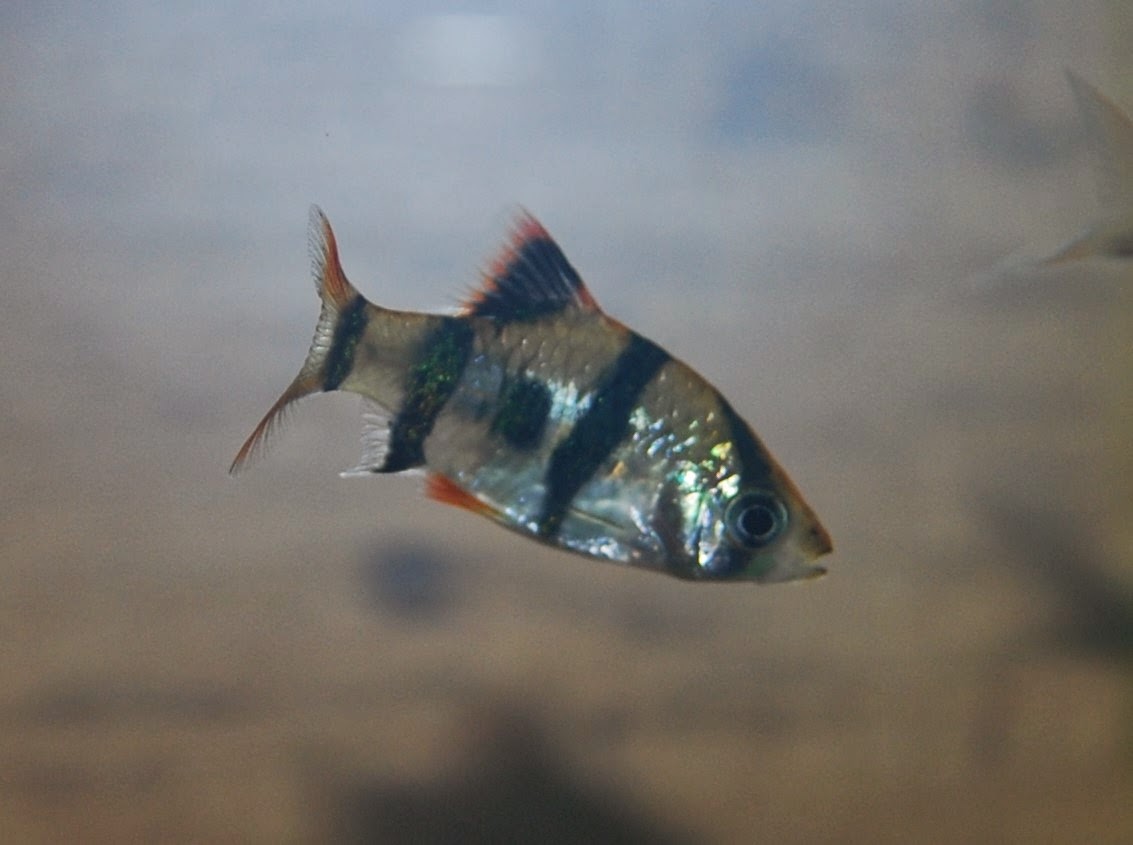 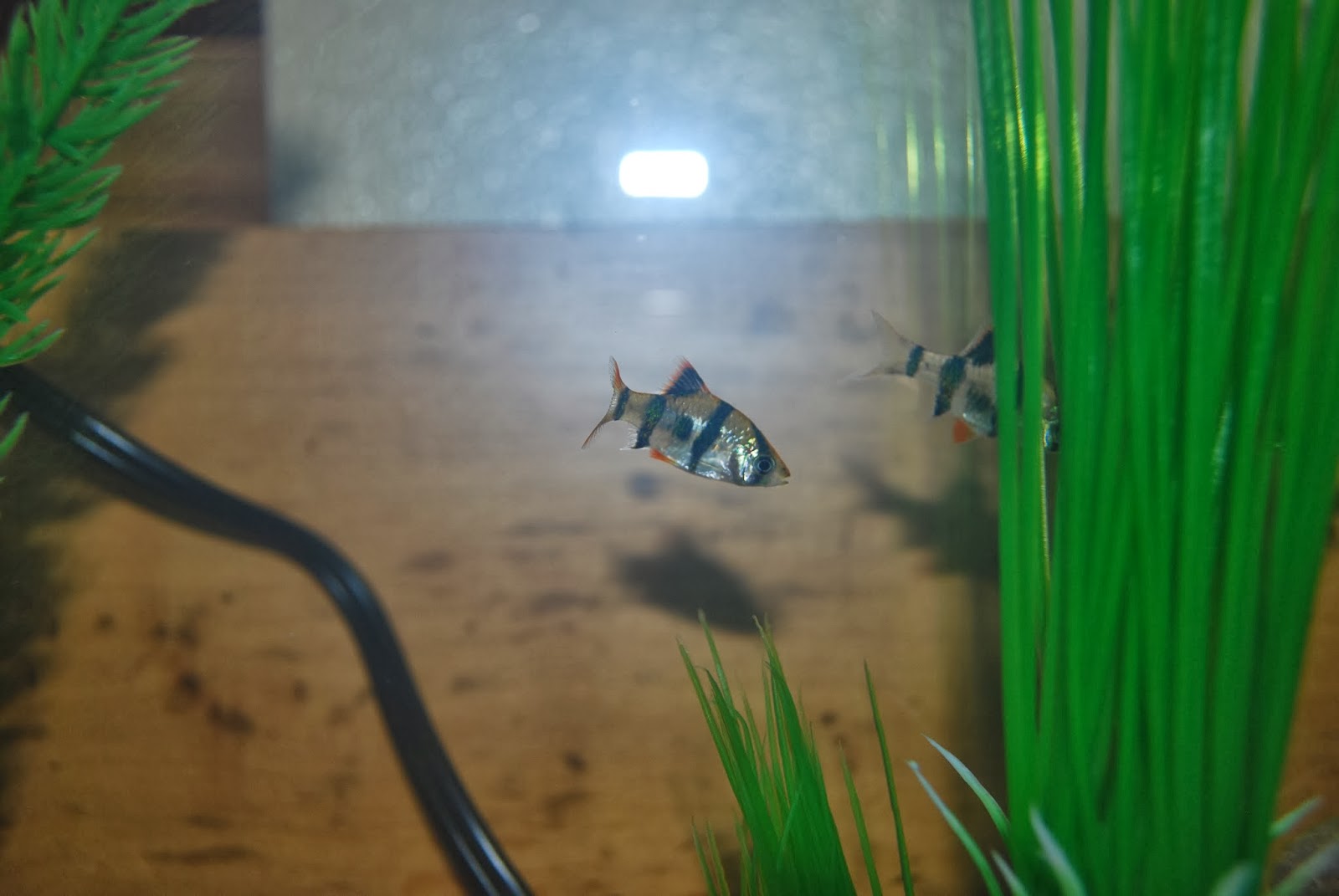 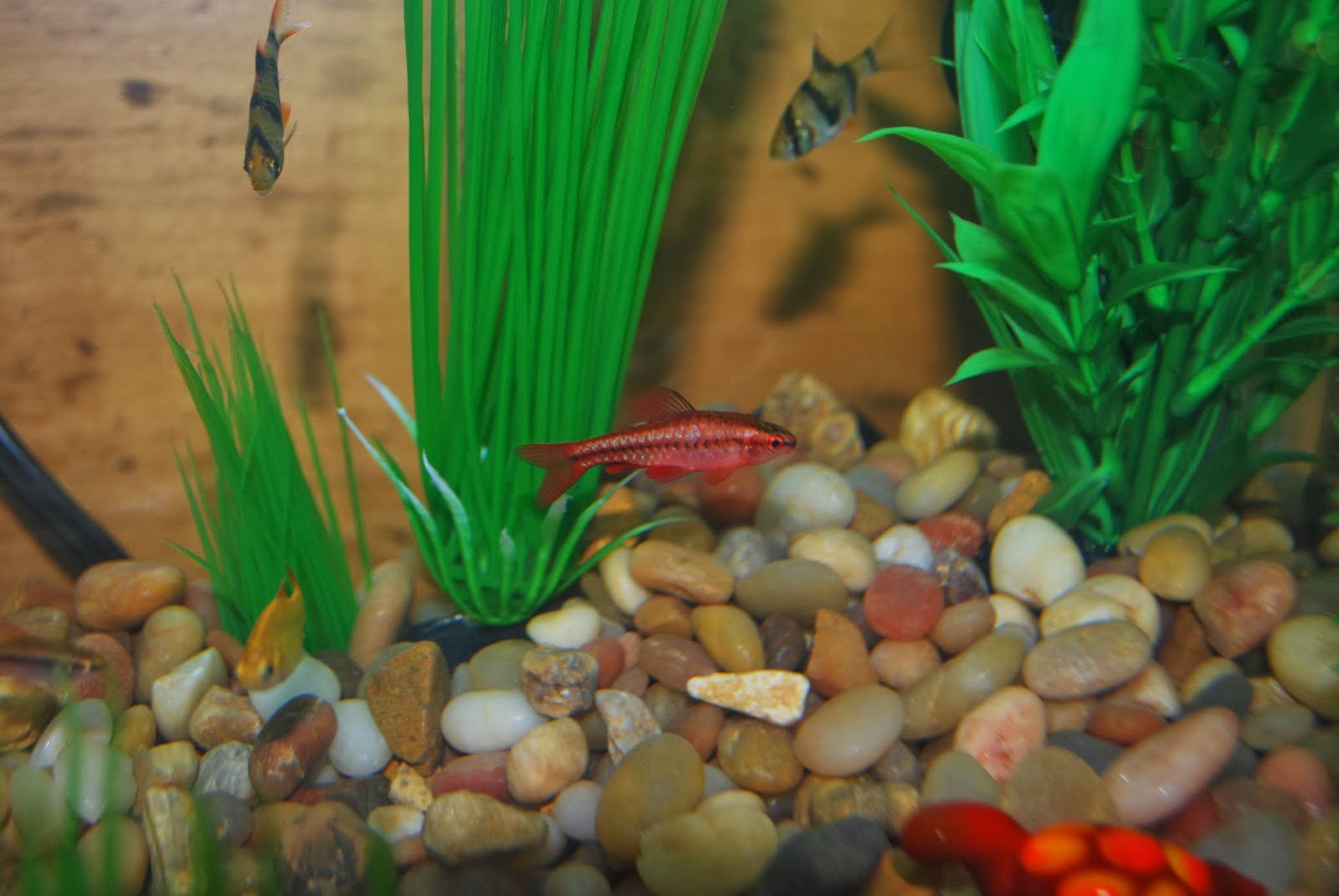 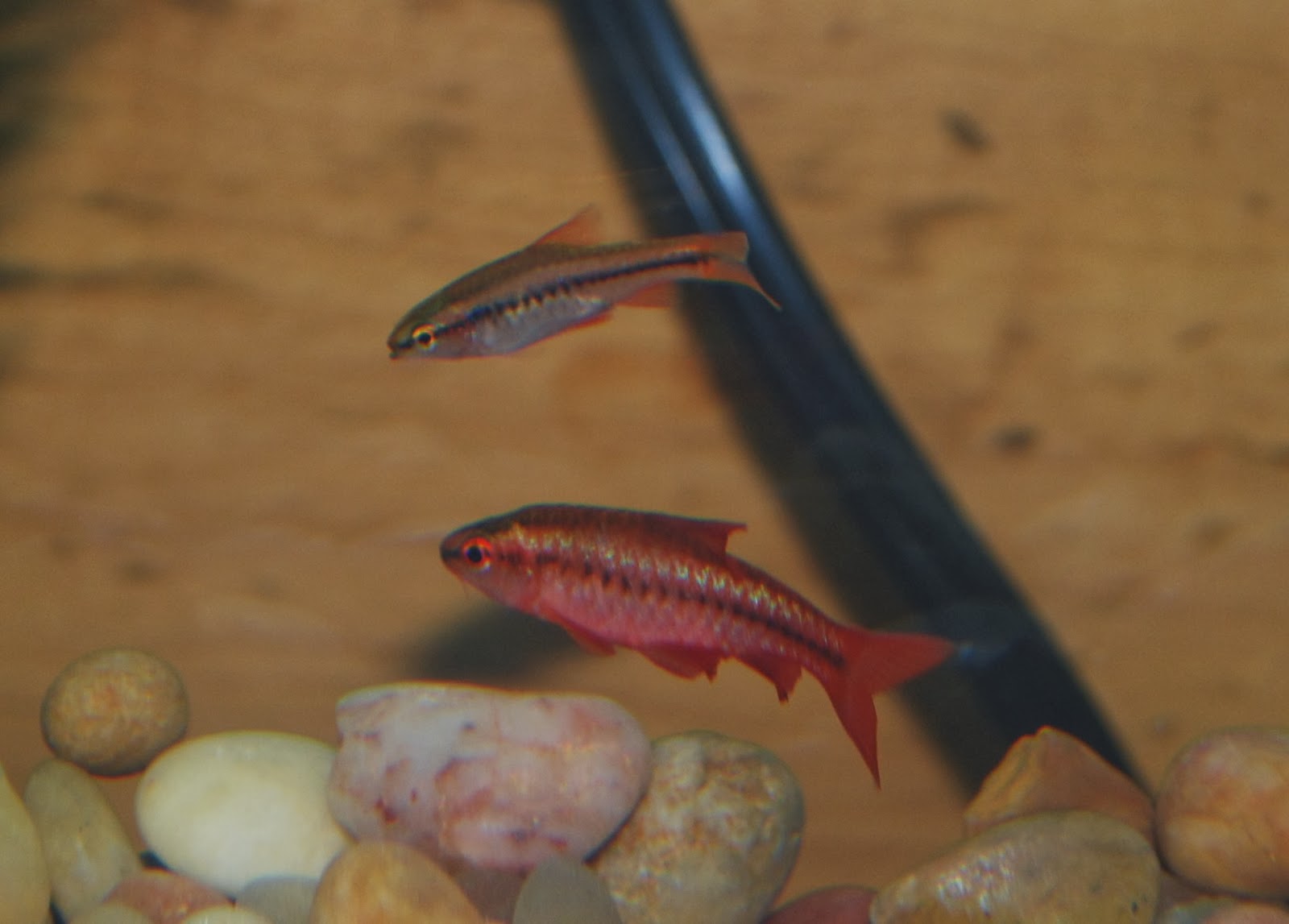 More Later
Posted by John at 10:34 AM No comments: 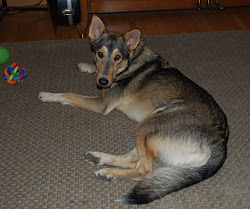